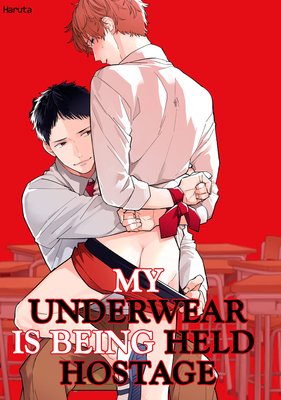 My Underwear Is Being Held Hostage

"Are you going commando?" Due to unforeseen circumstances, Ryo Kishimoto winds up freeballing it on the way to school one day... and against all odds, his younger teammate Haruma Nojima winds up with some major blackmail material. From that day on, Ryo is forced to live without underpants. He even has to wear a bra along with other less savory accessories... Haruma keeps ramping up the naughtiness, and despite his earlier reluctance, Ryo starts to enjoy it...! What fate lies in store for Ryo and his underwear? This is a freeballing love story about two high-school students!

My Underwear Is Being Held Hostage

Haruma Nojima has dirt on Ryo Kishimoto, so he forces him to go without underwear while coercing him into other kinds of mischief. What fate lies in store for Ryo's underwear... and his virtue...!?[187pages]
Pages: 187
Rent (48hrs) : $4.00

korisnik
17 Helpful
VIEW LESS
3 17 korisnik The beginning was interesting, but by the end of it, the story wasn't really anything special. A solid 3 out of 5. 7999
4 3 BlackBelle I did enjoy this. We have the bully dynamic, and threat to our poor uke's reputation. Each chapter, the Seme escalates the physical contact, and predictably, the Uke has a change of heart. While it's not an original storyline, I enjoyed the interaction between the two, and the ending was happy and cute. 13261
5 2 kleepart I really enjoy the art style, the cuteness, the blushing, and the story isn't too bad. Sometimes, just sometimes, I wish that they wouldn't go the blackmail route when it seems it will be going that way. 8080
5 2 notanon I love blackmails so i love this 8049
5 1 AkageCat Love it! 15667
4 1 mieikaz A blackmail turned to love story. Since both are still in highschool, so the blackmail things are consider 'tolerable'. And also, the parts where the 'underwear being a hostage', that was so funny. 4 out of 5. 13306
5 0 ChattyK2125 Ryu and Haruma...is a great high school love story. A bit sadistic on the part of Haruma to snag Ryo and make him realize he finally has feelings for him. Very ballsy game for Haruma...literally! A fun smexy not too much in your face but enough to be fun sex. It was lighthearted like you might expect high school dramas to be until the end. 24563
3 0 0hRa30h It was an okay story. Not really a fan of bullies, but I knew there's gotta be a reason behind him acting the way he does. I was left wondering about the concerned classmate: does he like him too or was he just a concerned classmate? 24510
4 0 monicaade Surprisingly good. 24205
4 0 Chiara692005 I love blackmaling plots as they make the smut scenes even hotter. I liked this manga so much that I bought it also in Japanese paper-back edition, although I can barely read and understand Japanese. Art is really to my taste and the 2 MC are both very cute and becoming even shy as their twisted relationship deepens.I am giving 4 stars and not 5 because of the censorship which I, as a European reader, still after reading Japanese mangas for years , find funny and excessive . 23412
5 0 Shiichan Lovely pantie romance! 11156