Gender-Swap at the Delinquent Academy -He's Trying to Get My First Time!- [VertiComix] (Current ch. 9)

Now in vertical-scrolling,full-color VertiComix format!
Torao is a delinquent who's always eager to let his fists do the talking. His greatest enemy is Ryohei, both the strongest guy in school and a terrible womanizer. When Torao tries to get revenge for the time Ryohei humiliated him in a fight, his plans are thwarted by a mysterious potion that turns him into a girl. From that point on, Torao (now Torako) develops a steamy and complicated relationship with the boy he hates! But, is hate really the only thing on Torao's mind!? 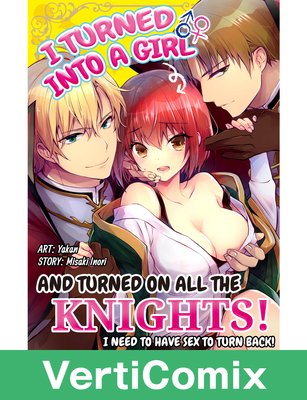 I Turned into a Girl and Turned on All the Knights! -I Need to Have Sex to Turn Back!- [VertiComix] (Current ch. 20)

Now in vertical-scrolling,full-color VertiComix format!
The hit gender-swap yaoi novel is now a comic! To return to manhood, he has to sleep with another guy!? Alto, a novice librarian, is cursed to turn into a woman. To turn back into a man, he has to have sex with men! Alto confesses his problem to the handsome bad-boy knight Sir Lloyd, who's only too happy to "help him out." Alto shouldn't be enjoying this, so why does it feel so good!? And then there's Sir Lune, the well-mannered knight-in-shining-armor Alto has always admired, who's worried about Alto, too... Enjoy this one-of-a-kind story full of gender-swap sex, boys loving boys, and a love triangle involving two handsome knights!
This work contains both straight and gay themes.