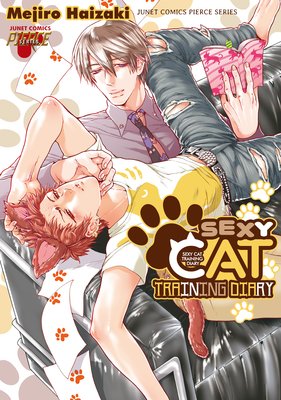 Novelist Hiroyuki has a habit of taking in stray cats. One day, at a bar, he meets a guy called Haru who's as miserable as an abandoned cat. Hiroyuki can't help taking him home! Despite Hiroyuki's innocent intentions, things take a naughty turn when Haru mounts him saying, "I wanted to thank you for today." For all his enthusiasm, though, it's obvious his tushy has never been touched before... The next morning, Haru's gone. Will he ever come back? Will Hiroyuki ever see him again? As he waits for Haru to turn up on his doorstep, Hiroyuki comes to realize he's gaga for Haru. Trials and tribulations abound as he tries to get this cat to love him back...

This manga is chock-full of steamy nights and pillow talk between a struggling novelist and a freeloading homeless kitty-boy!

Hector is a demon descended from a clan of doctors who made their living researching diseases deep in the bowels of the underworld. As a child, he falls in love with Lord Vet after the demon prince saves him from a group of bullies. A faint trace of that love lingers as he grows to maturity. One day, after being bitten by a stray zombie dog, Lord Vet contracts an incurable disease known as "The Black Scourge". Hector is assigned as Lord Vet's personal physician, but the prince's heart is deeply wounded, and he demands "comfort"...!