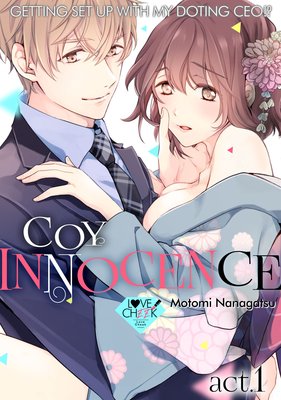 Coy Innocence -Getting Set up with My Doting CEO!?- (Current ch. 6)

"You're really gushing down there... This kind of thing turns you on, doesn't it?"
Who would have thought having a slightly naughty super hot guy would be this troublesome?

Miyu Tachibana, a weak-willed office worker, enjoys watching the company CEO, Masaki Sakuraba, from afar. One day, Miyu goes on date in place of her older twin sister, Misaki. At the restaurant, she finds out that the her sister's being set up with none other than her CEO! Miyu tries her best to hide the fact that she actually works at his company, but as fate would have it, she spots another coworker of hers in the same restaurant! In her panic as she tries to hide, she ends up pushing Masaki into a small and dark storage room. The close contact between the two tempts Masaki and invites certain acts towards Miyu. But, as things get steamy, they realize there are people outside! "That's where the excitement comes from... makes you tremble, doesn't it?" What will Miyu do as she finds herself in front of a beast in the guise of a gentleman?