Shiori Mizuno is a university student, and Yamato Mochizuki is her childhood friend and next-door neighbor. They used to be good friends, but he confessed to her and caused a rift between them. Shiori was devoted to track and field at the time and, while Yamato was her biggest supporter, she could only see him as like a little brother. She distanced herself from him by going to a boarding school, and that was that.

Several years later, however, losing both Yamato and track and field made Shiori realize how important he really was to her. Shiori desperately wants to go back to the way they were before, and is prepared to accept anything if it'll change his heart... but their relationship becomes solely physical with no feelings from him, and the pain drives her to tears... My Little Brother Is a Naughty Beast -Our After-School Secret- (Current ch. 7)

Hina has a fear of men, but her dear stepbrother, Sho, is always there to protect her. He's a bit mean, but he's kind and good-looking. One day, Hina resolves to stop relying on her brother... but the balance between the two starts to crumble when his friend, Rei, makes a move on her... "I'm a man too, you know?" Sho pushes her down onto the bed, caresses her with his fingers and tongue, and thrusts deep inside her, making fierce, hot love to her... This little brother is a wild beast! 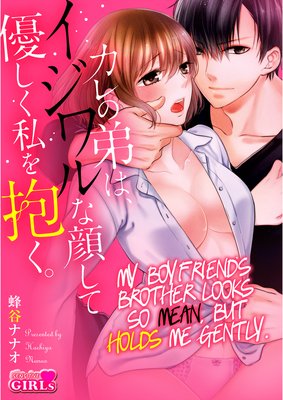 My Boyfriend's Brother Looks So Mean, But Holds Me Gently [Total ch. 3] Completed

Misaki is going to live with her fiance, Yuuto. On her first night there, she makes love in the darkness for the first time like she's always wanted! Although it's her first time, her sensitive parts are licked so gently that she twitches and jerks repeatedly in pleasure... She was so happy that her love, Yuuto, had taken her... or so she thought. It had actually been his younger brother, Haruto! After that, Haruto uses the incident to control her. Regardless of whether they're at school or at home, he demands her like a beast. He kisses her deeply as they become entwined. It feels so good that her body melts from his countless sweet and bitter caresses that touch her inside! She knows it's wrong, but she can't resist him when he holds her so gently...!