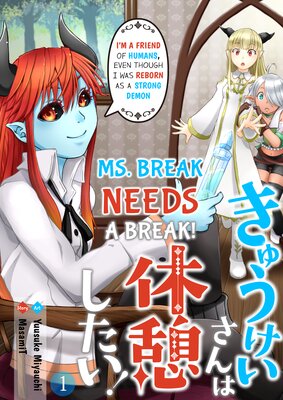 Ms. Break Needs a Break! -I'm a Friend of Humans, Even Though I Was Reborn As a Strong Demon- (Current ch. 7)

Tamae Kagami is an employee who tends to sleep more than most people, so everyone calls her "Ms. Break." After working on a bug in the game her company created, she takes a long nap?only to wake up to a strange window on her computer screen that prompts her to input a level number. Although she doesn't know what the level is for, she inputs 9,000, just for fun, and presses the enter key. Before she knows it, she wakes up again?this time, she's reborn in a parallel universe.

Long ago, war broke out between the regions of Kanto and Kansai, splitting the country in two. Kansai became a vassal state of Kanto and developed characteristic advancements. However, with the decline of the government and the police force, crime ran rampant. Those criminals are called Akudama.
This crime action story is set in a highly advanced, yet twisted society, and each Akudama has a different method of coping. The individual styles of each Akudama will collide as they finally assemble for one purpose. 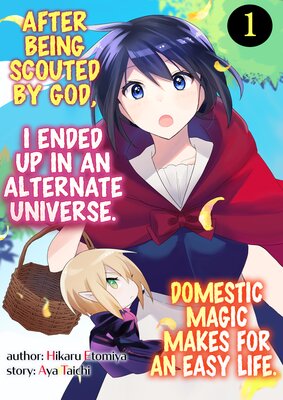 After Being Scouted by God, I Ended up in an Alternate Universe. -Domestic Magic Makes for an Easy Life.- (Current ch. 8)

After God reaches out to Towako Yamada following her death, she is transferred into Maria's body in an alternate universe called Astaire. Eventually, she nicknames herself "Towaria," or "Toa" for short.
God grants her three magical powers: "Domestic Magic," "Appraisal," and "Item Box."
While enjoying her new domestically magical life in this alternate universe, she undertakes her previous landlord Khalkis' dream of becoming a pharmacist. Domestic magic will make for an easy life?or so she thinks.