I Wish You'd Stayed a Kid.

During the school entrance ceremony, student body president Kazu is reunited with Hideki, a younger guy he used to hang out with when they were little kids. The formerly eccentric Hideki's grown into a fine young man, but now he's acting cold towards Kazu. That's because long ago, when Kazu saw Hideki's dad having sex with another man, he hurt Hideki by saying, "That's disgusting......" At the time, Kazu hadn't known that Hideki was trying to tell Kazu he loved him and had taken Kazu's remark as a rejection! Now that Hideki's cleared up the misunderstanding, he's become an uncontrollable puppy-dog that keeps following Kazu around......! 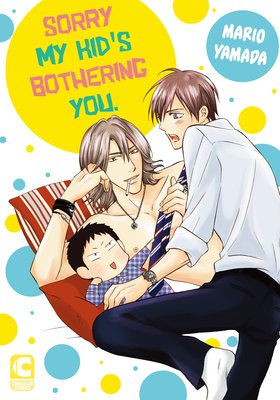 Sorry My Kid's Bothering You.

Hiroki, a single parent, is having a little trouble with his next-door neighbor. Hiroki's a very serious businessman and has absolutely nothing in common with the younger, flashy Shohei... Except Hiroki's son, Hideki, starts going to Shohei's apartment and causing trouble. Shohei criticizes Hiroki's parenting skills and even calls him sexually frustrated, so Hiroki forgets to apologize and the two get into a fight. They end up accidentally kissing, and their relationship starts heading in a new direction...