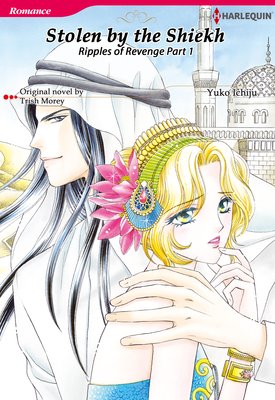 Stolen by the Sheikh The Arranged Brides Duo 1

"You have four weeks to make a wedding dress." Rising-star fashion designer Sapphire is all but conscripted by Sheikh Khalid, ruler of the desert kingdom of Jebbai. Khalid practically abducts Sapphire to his kingdom, leaving her lover, Paulo, behind. Once in Jebbai, Sapphire faces strange obstacles-not only is she denied a fitting session with the bride-to-be, she isn't even allowed to see her! Sapphire soon learns the truth: Khalid plans to marry her to settle an old score with Paulo! "You protected me, even if it meant making an enemy of the world." Seventeen-year-old Helene finds herself facing a forced marriage to a Middle-Eastern Sheikh. Italian lawyer Paulo saved her from that fate, agreeing to marry her until the Sheikh found a new object of desire. Paulo's sexy voice with a lilting accent, his passionate and sincere personality... Helene fell for him at first sight. But she was unaware of her impact on Paulo's destiny. That is, until she learned that the Sheikh stole Paulo's lover and made her his wife...