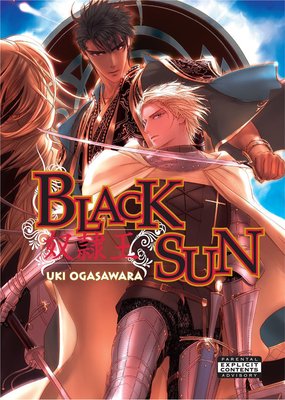 Gerun Fortress - a coastal stronghold along the Mediterranean Sea. Here, two-hundred Monastic Knights make their final stand against a league of 20,000 Middle Eastern soldiers led by General Jamal Jan. Called "beardless" by some, "shameless" by others, Jamal soon seizes the castle and its acting commander, Prince Leonard de Limbourg... The general's ideas of how to subjugate the enemy do not conform to the typical rules of warfare, however... In quick order, Prince Leonard finds himself stripped naked and forced to perform in front of his own men... Leonard's humiliation does not end there; now the general's captive slave, he is brought back to a strange land and presented before His Majesty the Sulta... Will Jamal's deviant attentions lead to certain punishment for both himself and Prince Leonard? Or can the prince accept the sinful feelings buried within himself that cause him to enjoy Jamal's forceful touch? To the victor go the spoils of war, and in Black Sun, creator Uki Ogasawara (Chronicle of the Divine Sword) presents a historical look at military (and personal) conquest!