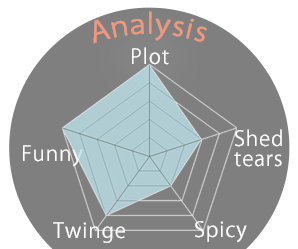 Do you have any of the following symptoms?

↓I prescribe this manga:↓

Love strikes without warning. The scary-faced prince who gallantly saved Hajime was in fact, Saburo, an older student from his school. Once Hajime realizes he's in love, he's got no choice but to go on the offensive. At first Saburo thinks of Hajime as nothing but a nuisance, but is gradually moved by his single-mindedness.

Saburo tries to keep his distance from Hajime, but Hajime knows that Saburo's a nice guy really:"I'm not a nice guy.""You are. You're a nice person."

A series of problems appear to get in the way of their love. Even if Saburo is a thug (he's not), and has an illegitimate love child (he doesn't) Hajime still wants to spend the rest of his life with him.

Read it, and laugh your troubles away!
User's Reviews
I love this story! I'd seen this author's website before, so I bought it as soon as I saw it! This story is about the main character, Hajime, and his inoccent and sweet relationship with his older friend. There's no sex or anything like that. It's kind of a comedy... but it's still a proper love story, and slightly sad in places, so I loved it. The older friend is freakin' cool! He's the kind of guy you don't really see anymore: the tough, manly rebel (who's actually really kind). This was made for me! The main character's really cute, and so is the older friend's boss where he works, but whatever... all the characters are amazing! It's a slightly humorous and a really heart-warming story!
My first impression of the drawing was... "This isn't your typical yaoi..." It is a comedy, but boy can it make you cry. Hajime, the hero of the story falls head over heels for an older student. Basically, the older student helps Hajime out when he is being hounded by some bad guys. It's kind of like a shojo manga that's been turned into yaoi; the hard-nosed and stubborn seme has a lot to handle with the uke's liveliness and youth, but he is very passionate and it shows in places throughout the manga, so much so that it is more of a drama than yaoi at times. It is a lovely story that eases your tired heart. I really want to find out what happens to them. This is easily in my top three favorite yaoi. A must-read!
The pictures are simple and the story's really easy to get into. It's not vividly illustrated, but the characters, background and use of shading is so subtle. It's really effective. There's a tough senpai who puts on a strong front and a super-energetic kouhai. I love those sorts of relationships. The author did a great job with the phrasing and dialogue, which really made it a joy to read.