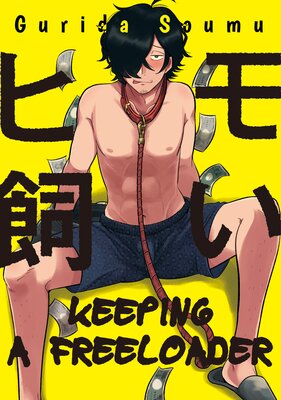 Keeping a Freeloader [Plus Bonus Page and Renta!- Only Bonus]

Do not be going off to see anyone else, okay?

Yuta Kaino is a kind office worker who's overwhelmed with his job, and the only thing he looks forward to is going home to where a freeloading guy named Hajime Himoda is waiting for him. They met when Yuta saved Hajime from a fight with a restaurant owner who accused him of trying to leave without paying, and this led to Yuta taking in the homeless and unemployed guy under the agreement that he'd give Hajime money in exchange for love. Yuta is soon hopelessly addicted to the time and physical relationship he shares with Hajime because it eases the pain in his heart. Despite them being together for a long time, Hajime won't reveal anything about his past, which makes Yuta worried. Then, just as if his worst nightmare has come true, during the Obon holiday, Hajime suddenly disappears !

This book also contains the story The Dragon Eating Lion, which is a wild yaoi tale about an uncontrollable older brother who adores his younger brother and how the younger brother has to deal with his antics.
Also includes a bonus story, a cover story, and a digital-exclusive story.

Keeping a Freeloader [Plus Bonus Page and Renta!- Only Bonus]

Yuta Kaino is a kind office worker whose only joy during the day is to go home to where a freeloading guy named Hajime Himoda is waiting for him. But then, Hajime suddenly disappears...!?[177pages]
Pages: 177
Rent (48hrs) : $4.00

GrimLuciel
April 20, 2021 (JST)
5 Helpful
VIEW LESS
3 5 GrimLuciel First story was actually really cute!!! The second story is straight up sibling incest tho so uh...kinda ruined it for me esp cause the first one was so cute. 25028 April 20, 2021
2 3 eightyroses I regretted buying this as soon as I got to the second story. Not gonna lie, I don't mind the incest but what the older brother does to the younger one is NOT okay. I finished it to see the “happy ending” but I still didn't like it. First story was alright, comedic and sort of sad. Kind of cute, wouldn't say fluffy. Smut is okay. I'd only reread the first one, but I'd recommend just renting this one if you're gonna go for it. 25066 April 22, 2021
4 2 angelfeathers This was pretty good! Not quite where I expected things to go based on the cover but not totally jarring.First couple is cute (and super dependent on each other.) I love Hajime's look!! For the second couple I feel like I didn't get enough set-up to enjoy them as much so I didn't feel much of anything though I liked their designs... The flow of dialogue is kinda so-so sometimes in both but I still had a generally good time.FYI there is non-con in both and first story gets pretty sad. :( Hope you enjoy if this is your thing! 25072 April 22, 2021
5 1 ozmo Personally I loved this! Cute, funny, great art, but be warned that it touches on some dark subject matter. As the others have said, the second story (one chapter compared to the first story's three) is incest. Now I'm a freak so that's not a deal breaker for me, but the older brother's behavior /is/ pretty off putting. Borderline yandere really. But the story with the free loader is the real meat of the story here and it's great! 25212 May 01, 2021