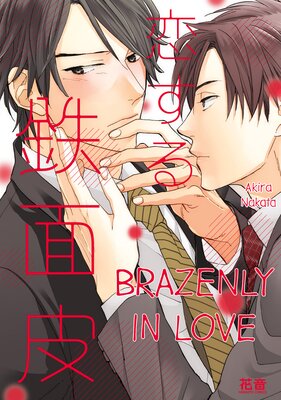 Brazenly In Love [Plus Renta!-Only Bonus]

Ryono Kitagawa, the sales department superstar with the reputation of being the most handsome guy in the company, has a secret he can't tell anyone about. He's a scaredy-cat who blushes from unexpected events. One day, he realizes he can calm down in front of Ryo Natsume, his strict senior colleague who's the hope of the R&D department, and someone he didn't like. For some reason, he feels relieved whenever Ryo's around. Ever since then, he's become attached...! On the other hand, though Ryo's irritated by Ryono's unconscious behavior, he also had a secret. He's totally into guys and has had his eyes on Ryono ever since Ryono joined the company four years ago...! A slow business man with erythromania and a workaholic.

What did you think of this comic? Help other users by tagging it!
Consensual (3) Feel-good/Heartwarming (2) Slow-burn (1) Relatable (1)
SHARE YOUR VIBES
Please note: You must be signed in to leave your Vibes.
Sign in
Go to Ch.1 Add to Wishlist
OLDEST NEWEST
Take a Peek!

Brazenly In Love [Plus Renta!-Only Bonus]

DarthVader
January 16, 2022 (JST)
6 Helpful
VIEW LESS
5 6 DarthVader I enjoyed this a lot! The story is cute and both of the main characters are acting like adults. I really enjoyed that one got to see both characters' point of view to feel with them. 28271 January 16, 2022
5 4 MissSleepless Incredibly charming. Great characters (Ryono is such a mood! I relate so much as an introvert in a highly social job.), fantastic clean art, and a nice medium-burn romance. Also, we get chapters from both Ryono and Ryo's perspectives, which is such a rarity, and it made it even better! Loved it from beginning to end. 28268 January 15, 2022
5 2 Rira Totally love it, I hope the other volumes will be translated too, can't wait to read them! 28996 March 28, 2022
5 1 SakuraBlues Love the characters! I'm waiting for the second volume with Tomita's story :D 28627 February 18, 2022
5 0 HorseObsessed I LOVE THIS BOOK!!! The artwork is beautiful, it's very intricate To the Mangaka, PLEASE DON'T EVER USE THE GHOST/SHADOW PEOPLE TEMPLATE!!! Don't slack off on the artwork, keep it as great as you've done in this piece. Please! The artwork & story match. Ryono is so hot (& funny with the blushing @ the drop of a hat). I Highly Recommend this one! ;() 30797 October 08, 2022