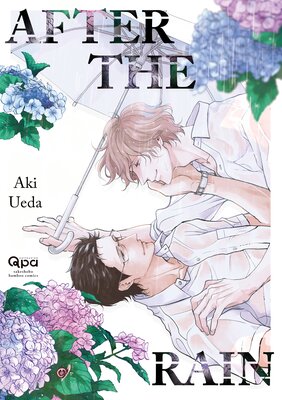 After The Rain [Plus Digital-Only Bonus]

It only took a moment for his five-year-long affair to end.
Broken-hearted, Natsuro is sitting in a park he once frequented with his former love when a man approaches him, reminding him of the one he'd just lost. His name is Tsuyuhiko.

Tsuyuhiko practically forces Natsuro to come to his apartment,saying he can't bear to leave a man drowning in his sorrow. Then,exchanging few words, Tsuyuhiko says Natsuro can think of him as a replacement for his former love as they indulge themselves in pleasure.

What did you think of this comic? Help other users by tagging it!
Dub-con (2) Violence/Blood (2) Non-con (2) Heavy/Deep (1)
SHARE YOUR VIBES
Please note: You must be signed in to leave your Vibes.
Sign in
Go to Ch.1 Add to Wishlist
OLDEST NEWEST
Take a Peek!

After The Rain [Plus Digital-Only Bonus]

Natsuro is sitting in a park thinking about his lost love when Tsuyuhiko, who reminds him of his ex, approaches him. Tsuyuhiko often picks up men in pain, leading Natsuro to learn something about himself he never knew existed.[284pages]
Pages: 284
Rent (48hrs) : $
Buy : $8.00

Munree
January 05, 2022 (JST)
2 Helpful
VIEW LESS
5 2 Munree The sequel I badly wanted to see, but didn't know it existed! And I'm absolutely happy to see it, really wanted to see a continuation of Natsuro's story!~ Story might seem like it's going really fast at first, but there is more to it and a lot of more reason behind it. Page 264 is absolutely beautiful? More of Aki Ueda-sensei, please! 28136 January 05, 2022
1 1 fuyuyume NO. I feel Natsuo pushed his feelings on Tsuyuhiko forcefully and guilted him into this "love". Not everyone loves the same and instead of learning Hiko's love language Natsuo forced him to adapt to his own. Yes, he got him out of a bad situation by bending and changing him into who he wanted. That is manipulation not love. 28190 January 08, 2022
3 0 belovedless This story has an interesting kink involved. Lots of non-con and dub-con. But I think it's way better than the first story in this series. 28767 March 05, 2022