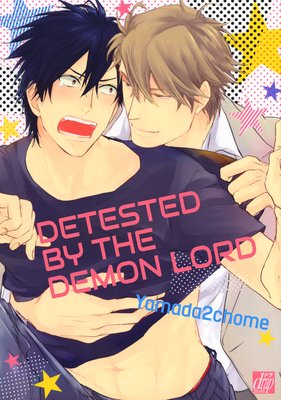 Detested by the Demon Lord

"I was born to defeat you. Just give up and let me take your body."

Mao is the descendant of an ancient demon lord. Whenever he makes eye contact with someone, they're his to command! Mao's spent his whole life ashamed of his lineage, but one day, he meets a man named Kamiko who claims to be the legendary hero that will defeat him. When it comes to how Kamiko plans to beat him... Mao is in for the shock of his life...

Yaoi_MangaYaoi-FantasyYaoi-Rivals Full Volume/Tankobon Must_read (10) LOL (5) Whoa (2) Oh_yes (1)
VOTE
Please note: You must be signed in to leave your Vibes.
Sign in
Go to Ch.1 Add to Wishlist

Detested by the Demon Lord

Nice guy Mao happens to be descended from a demon lord. One day, he meets Kamiko, the descendant of a hero and Mao's born nemesis! Although he reluctantly agrees to battle Kamiko, Mao has no idea what he's signing up for...[154pages]
Pages: 154
Rent (48hrs) : $
Buy : $7.00 Detested by the Demon Lord (2)

The battle rages on between Mao and his rival, Kamiko. Mao has finally found a method of domination that puts him on the same playing field. However, visits from family members on both sides complicate their situation even further.[155pages]
Pages: 155
Rent (48hrs) : $
Buy : $7.00

Kkreidler
5 Helpful
VIEW LESS
5 5 Kkreidler Sexy, funny, and unique, this title is one of my favorites! Be warned, there is some non-consensual stuff in this one. However, it's definitely worth a read! Mao is a demon lord living as a normal person. Everything is fine until the hero appears to force the demon lord into submission ... through sex. Mao is an adorable tsundere who is in way over his head! It's a fun, fluffy read and definitely worth it.Here's hoping they translate the other volumes! 13732
5 2 Apfel Ahhh looking forward to the third volume <3 Love Yamada2chome-sensei's works, would love to see more from this author. 19270
5 2 yamneko Enemies to lovers! Well, not like complete vile hatred for each other enemies, but still. It has a little bit of a slow burn, but not too much!!! Renta! Please! Get the other volumes!!! I need more Mao and Kamiko! 14228
5 2 theakaneko This is surprisingly funny. I wasn't expecting it from the blurb... you have a demon lord who hates being a demon lord and just wants to float under the radar, and a hero who grew up wanting to win their age old battle. Hero is pushy, demon lord gives in little bit by little bit.I would love to see more about these two. 13236
5 2 BlackBelle Love love LOVE this story! Mao is just a regular, nice guy cursed to being a demon lord while Kamiko is a bad ass thug who happens to be the hero. They are destined to battle each other until one is completely dominated. Sexy, funny and totally adorable, these two just made my day. 13235
5 1 PennyDreadful Second book just as good as the first! 17688
5 1 yukitsune It's a mix of hot and cute and they are in balance. Highly recommended! 13295
5 0 chipri this is probably one of my favorite BL ever. i adore yamada nichoume's works and this one is the one i want to see finished so badly someday. the couple has amazing chemistry and the pace is really suited to my taste. highly recommend this to every BL lover, especially the ones with hand fetishes or drool fetishes lol 21122